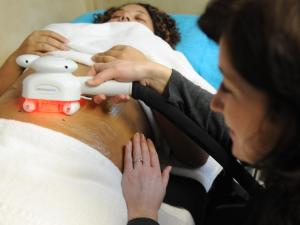 WHEN I was first approached about trying non-invasive laser treatment, I was duly sceptical. How could the treatment effectively zap away fat, and have you shed centimetres almost instantly?

I visited the Tygerberg Multicare Centre to try the procedure for myself. I had nothing to lose, but my love handles.

I filled out my medical history and Dr Liezl Voshol-Botha, a homeopathic practitioner and managing director of the clinic, explained the iLipo procedure.

Approved by the Food and Drug Administration in the US, the lasers simulate a natural biochemical change in the fat cell, breaking down triglycerides into free fatty acids and glycerol molecules. These smaller molecules escape through the cell wall and are transported to the lymphatic system to be used as energy during exercise.

Simply put, the fat cells are like “grapes”. The low level lasers would melt the fat inside the cell. Once this happens, the actual cell is emptied out within 10 minutes of exposure.

The centimetre reduction is caused as a result of the “grape-like” cell being emptied and reduced to a “raisin”. There is no damage to the fat cell.

Voshol-Botha explains it is important to exercise within 24 hours so that the energy could be used. Unlike liposuction – which removes the entire fat cell – the emptied cell is still present, and can fill up with fat again if it is not burned off with exercise.

Clients would have a session twice a week for four weeks. The procedure can be done on all parts of the body, except for women’s breasts due to the glands. The most popular area is the abdomen, says Voshol-Botha.

The loss of centimetres could vary between 2-5cm per session. Factors influencing reduction includes the body’s metabolism.

During and after the process, it is important to exercise and maintain a good eating plan.

But surely with any eating plan and exercise, one could achieve the same results?

Voshol-Botha says centimetre reduction would not happen as quickly, and it would be an overall reduction, instead of in targeted areas.

She takes measurements of my belly at three points, from the base up – 84cm, 88cm and 92cm.

Once my measurements are taken, it’s time to start the procedure. Three lasers are placed on my abdomen for 10 minutes a side. For the 20 minutes the lasers are at work, there is no physical sensation that tell me whether or not it’s being effective.

Once the lasering is complete, Voshol-Botha applies gel to my belly and uses the iLipo Ultra machine. The device sucks up the skin –like a vacuum massage – and squeezes out whatever fat is left in the cell. The process helps with cellulite reduction, skin firming and collagen production.

After about 40 minutes, it’s the moment of truth. Did it work or not?

Now for the hard part: burning about 300 calories to ensure the released fat doesn’t go back to where it came from.